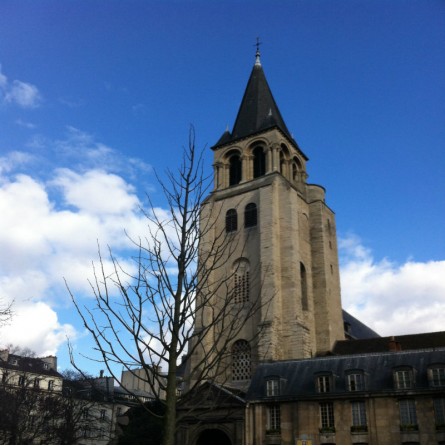 Its birth dates back to the 6th century when the king Childebert decided to found an abbey, one of the richest in France. Unfortunately during the French Revolution, its cloister was used as a saltpetre deposit and an explosion destroyed most of it only the church was spared. It became an intellectual epicenter  when theater troops came to perform to its famous fair during the middle ages. From the 17th thanks to the opening of "La Comedie Francaise", cafés started popping up  to offer a very exotic drink and a place to gather. Thus actors, writers, encyclopedists, philosophers, humanists came to discuss ideas in complete opposition to an absolute monarchy being Voltaire one of the main leading figures. Strolling around this area means to come across many plaques on buildings where celebrities lived or met. George Sand, Oscar Wilde, Honoré de Balzac, Champollion , Voltaire, Charles Baudelaire, Eugénie Delacroix, Ingres, Borian Vian, Jacques Prévert, Picasso, Serge Gainsbourg, Richard Wagner, Marguerite Dumas, Guillaume Apollinaire, Louis Aragon, Ernest Hemingway, James Joyce, Albert Camus, Pablo Picasso, Alberto Giacometti, Marguerite Duras, Jean-Paul Sartre, Simone de Beauvoir, among many others. Most of them get together in 'Les Deux Magots' or the 'Café de Flor' and even today you might be able to glimpse a few personalities.

Cafés and their famous artists

Small groups of 10 people or less

Electronic headphones for clear listening to your guide